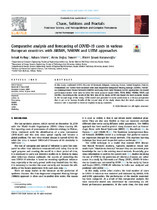 In this study, confirmed COVID-19 cases of Denmark, Belgium, Germany, France, United Kingdom, Finland, Switzerland and Turkey were modeled with Auto-Regressive Integrated Moving Average (ARIMA), Nonlinear Autoregression Neural Network (NARNN) and Long-Short Term Memory (LSTM) approaches. Six model performance metric were used to select the most accurate model (MSE, PSNR, RMSE, NRMSE, MAPE and SMAPE). According to the results of the first step of the study, LSTM was found the most accurate model. In the second stage of the study, LSTM model was provided to make predictions in a 14-day perspective that is yet to be known. Results of the second step of the study shows that the total cumulative case increase rate is expected to decrease slightly in many countries.