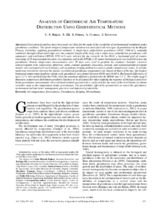 Geostatistical analyses have been used very little for the study of the variability of environmental conditions under greenhouse conditions. The spatio‐temporal temperature variation was assessed inside two types of greenhouses in the Bogotá Plateau, Colombia, applying geostatistical methods. A single‐layer polyethylene greenhouse (PGH, 5100 m2), naturally ventilated through a fixed open ridge over the complete length of the roof, and a single‐layer polyethylene greenhouse with automated roof ventilation (RPGH, 9792 m2) were selected for the research. In the PGH, a horizontal grid of sensors consisting of 30 measurement locations was installed, and in the RPGH, a 35‐sensor horizontal grid was installed across the greenhouse. Hourly temperature measurements over 28 days were used to perform the analyses. Isotropic classical semivariograms were constructed. Spherical, cubic, rational quadratic, Gaussian, circular, and exponentialsemivariogram models were evaluated to fit each dataset, and an ordinary kriging method was used to predict temperature values. A circular model was selected to represent the spatial variability of greenhouse temperatures for almost all hours of the day. The highest horizontal temperature gradients inside each greenhouse were found between 08:00 and 16:00 h. Horizontal differences of up to 3.2°C were predicted for the PGH, while the maximum difference predicted for the RPGH was 3.5°C. The results suggest important temperature distribution gradients that have to be accounted for when studying the response of biological processes inside greenhouse environments. Geostatistical methods proved to be a useful tool for the study of the distribution of climate variables such as the temperature inside greenhouses. The possibilities offered by geostatistics to assess the greenhouse environment include better management practices and improved productivity.