Anti-viral potential of garlic (Allium sativum) and it's organosulfur compounds: A systematic update of pre-clinical and clinical data 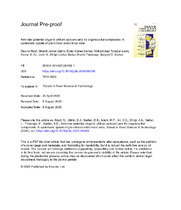 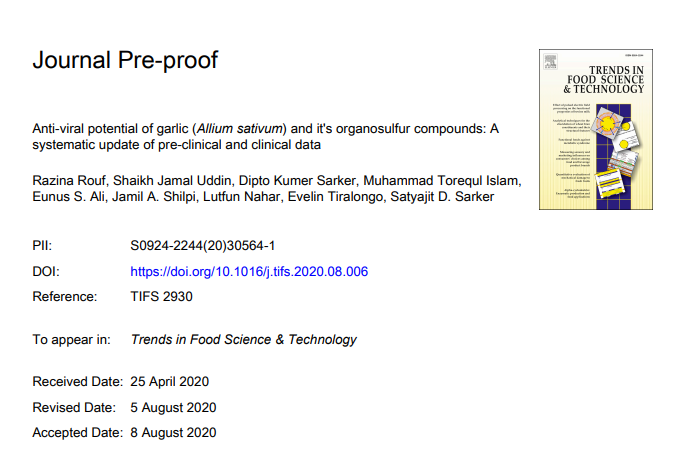 Background Garlic (Allium sativum L.) is a common herb consumed worldwide as functional food and traditional remedy for the prevention of infectious diseases since ancient time. Garlic and its active organosulfur compounds (OSCs) have been reported to alleviate a number of viral infections in pre-clinical and clinical investigations. However, so far no systematic review on its anti-viral effects and the underlying molecular mechanisms exists. Scope and approach The aim of this review is to systematically summarize pre-clinical and clinical investigations on antiviral effects of garlic and its OSCs as well as to further analyse recent findings on the mechanisms that underpin these antiviral actions. PubMed, Cochrane library, Google Scholar and Science Direct databases were searched and articles up to June 2020 were included in this review. Key findings and conclusions Pre-clinical data demonstrated that garlic and its OSCs have potential antiviral activity against different human, animal and plant pathogenic viruses through blocking viral entry into host cells, inhibiting viral RNA polymerase, reverse transcriptase, DNA synthesis and immediate-early gene 1(IEG1) transcription, as well as through downregulating the extracellular-signal-regulated kinase (ERK)/mitogen activated protein kinase (MAPK) signaling pathway. The alleviation of viral infection was also shown to link with immunomodulatory effects of garlic and its OSCs. Clinical studies further demonstrated a prophylactic effect of garlic in the prevention of widespread viral infections in humans through enhancing the immune response. This review highlights that garlic possesses significant antiviral activity and can be used prophylactically in the prevention of viral infections.