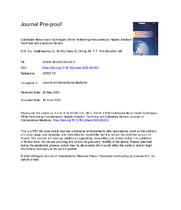 Percutaneous image guided thermal ablation has become a cornerstone of therapy for patients with oligometastatic disease and primary liver malignancies. Evolving from percutaneous ethanol injection (PEI), thermal ablation utilizing radiofrequency ablation (RFA) and microwave ablation (MWA) have become the standard approach in the treatment of isolated lesions that fit within the size criteria for curative intent therapy (typically 3-4cm). With the evolution of more intense thermal ablation, such as MWA, the dramatic increase in both the size of ablation zone and intensity of heat generation have extended the limits of this technique. As a result of these innovations, intra-procedural and postprocedural pain have also significantly increased, requiring either higher levels of intravenous sedation or, in some institutions, general anesthesia.