Climate change & dermatology: An introduction to a special topic, for this special issue 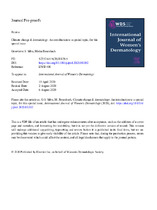 Anthropogenic global climate change spurred by fossil fuel consumption is a welldocumented phenomenon that has led to average global temperatures climbing to approximately 1° C above pre-industrial (1850-1900) levels, with even higher regional deviations in some areas and significantly increased average warming in densely populated urban centers and in the Arctic. 17; 30 Although the scientific community has held the consensus for decades that climate change is human-caused, this was last year elevated to ‘5-sigma’ certainty – the gold standard for level of scientific evidence.