Towards a Holistic Approach, in International Practice, to the Design and Implementation of Initiatives to Promote the Rule of Law at the National Level 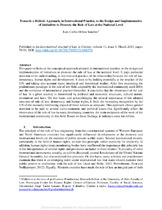 This paper reflects on the conceptual approach adopted, in international practice, to the design and implementation of initiatives to promote the rule of law at the national level. It pays particular attention to the understanding, in international practice, of the relationship between the rule of law, democracy, human rights and development. It does so by looking especially at the practice of the UN, and taking into account many empirical and theoretical studies. After first examining the predominant paradigm in the rule of law field adopted by the international community until 2010, and the evolution of international practice thereafter, it concludes that the observance of the rule of law in a given country is determined by political and economic structures, cultural norms, institutions and laws. On this basis, and acknowledging the critical importance of the adopted concepts of rule of law, democracy and human rights, it finds the increasing recognition by the UN of the mutually reinforcing impact of these notions as adequate. This approach allows greater attention to be paid to several socio-economic and political issues that significantly affect the observance of the rule of law in many developing countries, the main recipients of the work of the international community in this field. Based on these findings, it indicates areas for reform.