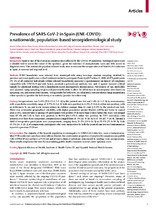 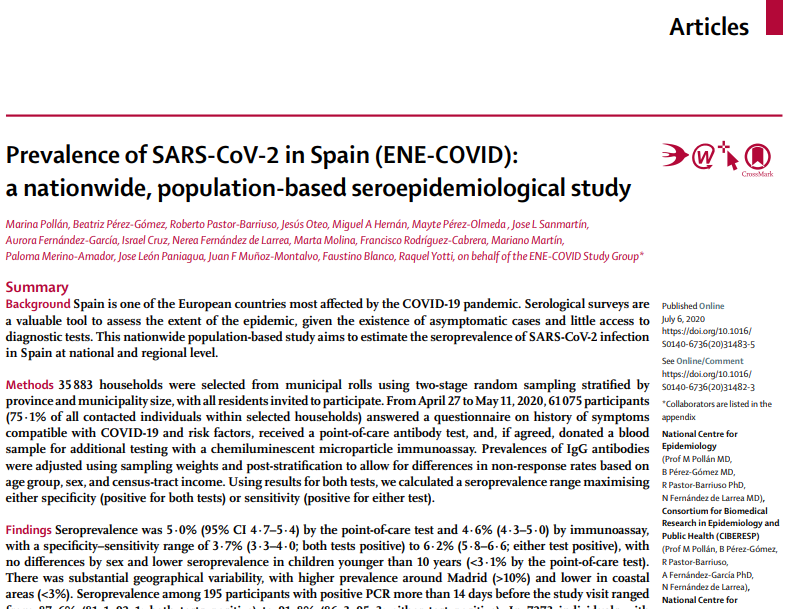 Background Spain is one of the European countries most affected by the COVID-19 pandemic. Serological surveys are a valuable tool to assess the extent of the epidemic, given the existence of asymptomatic cases and little access to diagnostic tests. This nationwide population-based study aims to estimate the seroprevalence of SARS-CoV-2 infection in Spain at national and regional level. Methods 35883 households were selected from municipal rolls using two-stage random sampling stratified by province and municipality size, with all residents invited to participate. From April 27 to May 11, 2020, 61 075 participants (75·1% of all contacted individuals within selected households) answered a questionnaire on history of symptoms compatible with COVID-19 and risk factors, received a point-of-care antibody test, and, if agreed, donated a blood sample for additional testing with a chemiluminescent microparticle immunoassay. Prevalences of IgG antibodies were adjusted using sampling weights and post-stratification to allow for differences in non-response rates based on age group, sex, and census-tract income. Using results for both tests, we calculated a seroprevalence range maximising either specificity (positive for both tests) or sensitivity (positive for either test). Findings Seroprevalence was 5·0% (95% CI 4·7–5·4) by the point-of-care test and 4·6% (4·3–5·0) by immunoassay, with a specificity–sensitivity range of 3·7% (3·3–4·0; both tests positive) to 6·2% (5·8–6·6; either test positive), with no differences by sex and lower seroprevalence in children younger than 10 years (<3·1% by the point-of-care test). There was substantial geographical variability, with higher prevalence around Madrid (>10%) and lower in coastal areas (<3%). Seroprevalence among 195 participants with positive PCR more than 14 days before the study visit ranged from 87·6% (81·1–92·1; both tests positive) to 91·8% (86·3–95·3; either test positive). In 7273 individuals with anosmia or at least three symptoms, seroprevalence ranged from 15·3% (13·8–16·8) to 19·3% (17·7–21·0). Around a third of seropositive participants were asymptomatic, ranging from 21·9% (19·1–24·9) to 35·8% (33·1–38·5). Only 19·5% (16·3–23·2) of symptomatic participants who were seropositive by both the point-of-care test and immunoassay reported a previous PCR test. Interpretation The majority of the Spanish population is seronegative to SARS-CoV-2 infection, even in hotspot areas. Most PCR-confirmed cases have detectable antibodies, but a substantial proportion of people with symptoms compatible with COVID-19 did not have a PCR test and at least a third of infections determined by serology were asymptomatic. These results emphasise the need for maintaining public health measures to avoid a new epidemic wave.