Health sector spending and spending on HIV/AIDS, tuberculosis, and malaria, and development assistance for health: progress towards Sustainable Development Goal 3 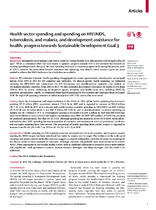 Background Sustainable Development Goal (SDG) 3 aims to “ensure healthy lives and promote well-being for all at all ages”. While a substantial effort has been made to quantify progress towards SDG3, less research has focused on tracking spending towards this goal. We used spending estimates to measure progress in financing the priority areas of SDG3, examine the association between outcomes and financing, and identify where resource gains are most needed to achieve the SDG3 indicators for which data are available. Methods We estimated domestic health spending, disaggregated by source (government, out-of-pocket, and prepaid private) from 1995 to 2017 for 195 countries and territories. For disease-specific health spending, we estimated spending for HIV/AIDS and tuberculosis for 135 low-income and middle-income countries, and malaria in 106 malaria-endemic countries, from 2000 to 2017. We also estimated development assistance for health (DAH) from 1990 to 2019, by source, disbursing development agency, recipient, and health focus area, including DAH for pandemic preparedness. Finally, we estimated future health spending for 195 countries and territories from 2018 until 2030. We report all spending estimates in inflation-adjusted 2019 US$, unless otherwise stated. Findings Since the development and implementation of the SDGs in 2015, global health spending has increased, reaching $7·9 trillion (95% uncertainty interval 7·8–8·0) in 2017 and is expected to increase to $11·0 trillion (10·7–11·2) by 2030. In 2017, in low-income and middle-income countries spending on HIV/AIDS was $20·2 billion (17·0–25·0) and on tuberculosis it was $10·9 billion (10·3–11·8), and in malaria-endemic countries spending on malaria was $5·1 billion (4·9–5·4). Development assistance for health was $40·6 billion in 2019 and HIV/AIDS has been the health focus area to receive the highest contribution since 2004. In 2019, $374 million of DAH was provided for pandemic preparedness, less than 1% of DAH. Although spending has increased across HIV/AIDS, tuberculosis, and malaria since 2015, spending has not increased in all countries, and outcomes in terms of prevalence, incidence, and per-capita spending have been mixed. The proportion of health spending from pooled sources is expected to increase from 81·6% (81·6–81·7) in 2015 to 83·1% (82·8–83·3) in 2030. Interpretation Health spending on SDG3 priority areas has increased, but not in all countries, and progress towards meeting the SDG3 targets has been mixed and has varied by country and by target. The evidence on the scale-up of spending and improvements in health outcomes suggest a nuanced relationship, such that increases in spending do not always results in improvements in outcomes. Although countries will probably need more resources to achieve SDG3, other constraints in the broader health system such as inefficient allocation of resources across interventions and populations, weak governance systems, human resource shortages, and drug shortages, will also need to be addressed.