The ‘thanato-resistome’ - The funeral industry as a potential reservoir of antibiotic resistance: Early insights and perspectives 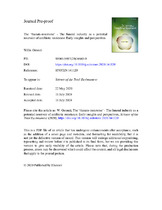