Vertical Transmission of COVID-19: A Systematic Review and Meta-analysis 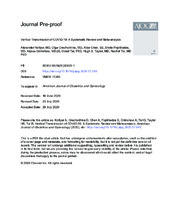 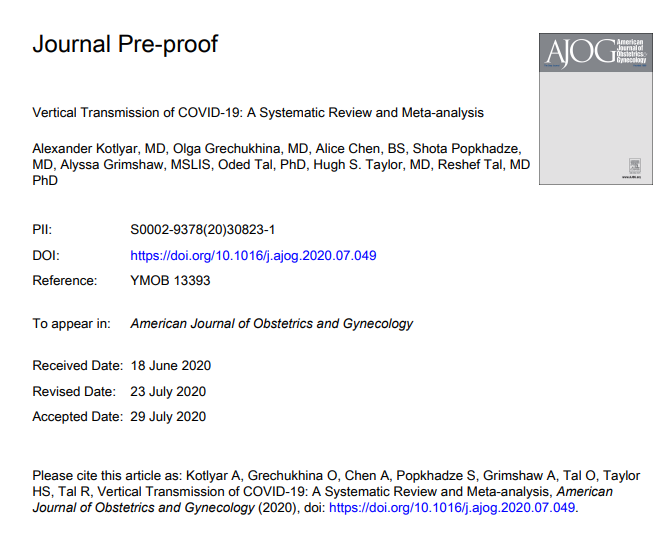 Objective We sought to conduct a systematic review of the current literature to determine estimates of vertical transmission of COVID-19 based upon early RNA detection of SARS-CoV-2 after birth from various neonatal/fetal sources and neonatal serology. Data sources Eligible studies published up to May 28, 2020 were retrieved from Pubmed, EMbase, MedRXiv, BioRXiv collection databases. Study eligibility criteria This systematic review included cohort studies, case series and case reports of pregnant women who had COVID-19 infection as confirmed by positive SARS-CoV-2 viral RNA testing, and had reported data regarding testing of neonates/fetuses for SARS-CoV-2 immediately after birth and up to within 48hrs of birth. In total, 30 eligible case reports describing 43 tested neonates, and 38 cohort/case series studies describing 936 tested neonates were included. Study appraisal and synthesis methods The methodological quality of all included studies was evaluated by a modified Newcastle-Ottawa scale. Quantitative synthesis was performed on cohort/case series studies according to neonatal biological specimen site to reach pooled proportions of vertical transmission. Results Our quantitative synthesis revealed that of 936 neonates from COVID-19 infected mothers, 27 neonates had SARS-CoV-2 viral RNA positive nasopharyngeal swab, indicating a pooled proportion of 3.2% (95% CI 2.2-4.3%) for vertical transmission. Notably, the pooled proportion of SARS-CoV-2 positivity in neonates by nasopharyngeal swab in studies from China was 2.0% (8/397) which was similar to pooled proportion of 2.7% (14/517) in studies from outside of China. SARS-CoV-2 viral RNA testing in neonatal cord blood was positive in 2.9% (1/34) of samples, 7.7% (2/26) of placenta samples, 0% (0/51) of amniotic fluid and 0% (0/17) of urine samples and 9.7% (3/31) of fecal/rectal swabs. Neonatal serology was positive in 3/82 (3.7%) (based upon the presence of IgM). Conclusion Vertical transmission of SARS-CoV-2 is possible and appears to occur in a minority of cases of maternal COVID-19 infection in third trimester. Rates of infection are similar to other pathogens that cause congenital infections. However, given the paucity of early trimester data, no assessment can yet be made regarding rates of vertical transmission in early pregnancy as well as potential risk for consequent fetal morbidity and mortality.