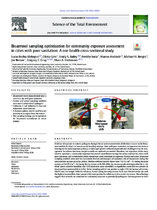 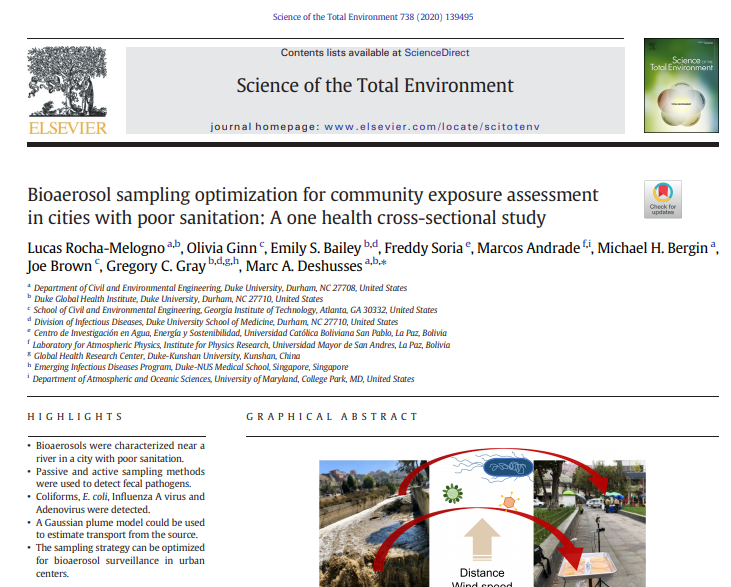 Evidence of exposure to enteric pathogens through the air and associated risk of infection is scarce in the literature outside of animal- or human-waste handling settings. Cities with poor sanitation are important locations to investigate this aerial exposure pathway as their rapid growth will pose unprecedented challenges in waste management. To address this issue, simple surveillance methods are needed. Therefore, the objectives of this study were to optimize a community exposure bioaerosol surveillance strategy for urban outdoor locations with poor sanitation, and to determine which bioaerosols could contribute to exposure. Passive and active bioaerosol sampling methods were used to characterize the fate and transport of sanitation-related bioaerosols during the rainy and dry seasons in La Paz, Bolivia. Median coliform bacteria fluxes were 71 CFU/(m2 × h) during the rainy season and 64 CFU/(m2 × h) during the dry season, with 38% of the dry season samples testing positive for E. coli. Wind speed, relative humidity and UVB irradiance were identified as significant covariates to consider in bioaerosol transport models in La Paz. Active sampling yielded one positive sample (10%) for human adenovirus (HadV) and one sample (10%) for influenza A virus during the rainy season. HadV was detected at the site with the highest bacterial flux. Four samples (8%) were positive for influenza A virus in the dry season. These findings suggest that aerosols can contribute to community exposure to potentially pathogenic microorganisms in cities with poor sanitation. The use of passive sampling, despite its limitations, can provide quantitative data on microorganisms' viability within realistic timeframes of personal exposure.