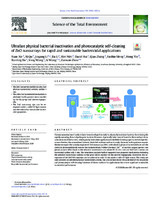 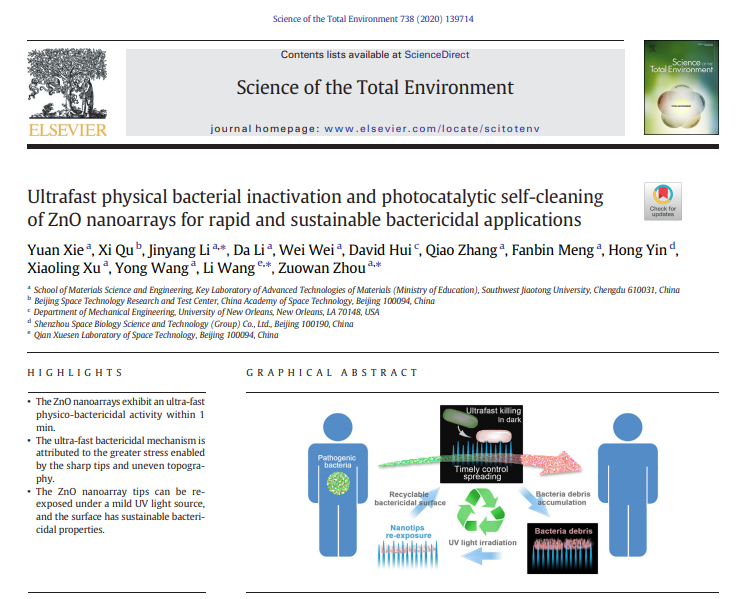 Various nanostructured surfaces have been developed recently to physically inactivate bacteria, for reducing the rapidly spreading threat of pathogenic bacteria. However, it generally takes several hours for these surfaces to inactivate most of the bacteria, which greatly limits their application in the fields favoring rapid bactericidal performance. Besides, the accumulated bacteria debris left on these surfaces is rarely discussed in the previous reports. Herein we report the nanotip-engineered ZnO nanoarrays (NAs) with ultrafast physical bactericidal rate and the ability to photocatalytically remove the bacteria debris. Neither chemical (Zn2+ or reactive oxygen species) nor photocatalytic effect leads to the ultrafast bactericidal rate, where 97.5% of E. coli and 94.9% of S. aureus are inactivated within only 1 min. The simulation analysis further supported our proposed mechanism attributing the ultrafast bactericidal activity to the great stress enabled by the uneven topography. Moreover, the reexposure of the ZnO NAs nanotips can be achieved in only 10 min under a mild UV light source. This study not only presents an ultrafast physical bactericidal activity, but also demonstrates the potential of the recyclable and photocatalytic self-cleaning functions of theses surfaces for applications that desire rapid and sustainable bactericidal performance.