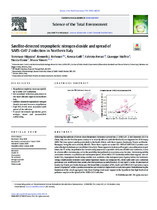 Following the outbreak of Severe Acute Respiratory Syndrome CoronaVirus 2 (SARS-CoV-2) last December 2019 in China, Italy was the first European country to be severely affected, with the first local case diagnosed on 20 February 2020. The virus spread quickly, particularly in the North of Italy, with three regions (Lombardy, Veneto and EmiliaRomagna) being the most severely affected. These three regions accounted for N80% of SARS-CoV-2 positive cases when the tight lockdown was established (March 8). These regions include one of Europe's areas of heaviest air pollution, the Po valley. Air pollution has been recently proposed as a possible risk factor of SARS-CoV-2 infection, due to its adverse effect on immunity and to the possibility that polluted air may even carry the virus. We investigated the association between air pollution and subsequent spread of the SARS-CoV-2 infection within these regions. We collected NO2 tropospheric levels using satellite data available at the European Space Agency before the lockdown. Using a multivariable restricted cubic spline regression model, we compared NO2 levels with SARS-CoV-2 infection prevalence rate at different time points after the lockdown, namely March 8, 22 and April 5, in the 28 provinces of Lombardy, Veneto and Emilia-Romagna. We found little association of NO2 levels with SARS-CoV-2 prevalence up to about 130 μmol/m2 , while a positive association was evident at higher levels at each time point. Notwithstanding the limitations of the use of aggregated data, these findings lend some support to the hypothesis that high levels of air pollution may favor the spread of the SARS-CoV-2 infection