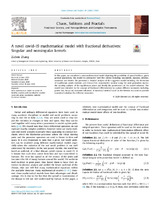 In this paper, we considered a new mathematical model depicting the possibility of spread within a given general population. The model is constructed with five classes including susceptible, exposed, infected, recovered and deaths. We presented a detailed analysis of the suggested model including, the derivation of equilibrium points endemic and disease-free, reproductive number using the next generation matrix, the stability analysis of the equilibrium points and finally the positiveness of the model solutions. The model was extended to the concept of fractional differentiation to capture different memories including power law, decay and crossover behaviors. A numerical method based on the Newton was used to provide numerical solutions for different memories.