Review of: “Hydroxychloroquine and azithromycin as a treatment of COVID-19: results of an open-label non-randomized clinical trial Gautret et al 2010, DOI:10.1016/j.ijantimicag.2020.105949 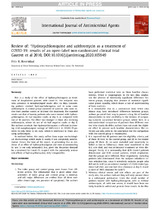 This is a study of the effect of hydroxychloroquine as treatment of hospitalised patients with Covid-19. The endpoint was virus presence in nasopharyngeal swabs after six days. Consenting patients received hydroxycholoroquine, and in some cases azithromycin. A control group consisted of patients who were either from another centre, or declined this treatment. The reported results are that of twenty patients who were treated with hydroxychloroquine, 14 had negative swabs at day 6, as compared with two of 16 controls. The effect was stronger in those also receiving azithromycin, where six out of six had negative swabs at day 6. The authors conclude that hydroxychloroquine is efficient in clearing viral nasopharyngeal carriage of SARS-CoV-2 in COVID-19 patients in only three to six days, which is reinforced in those also using azithromycin. As outlined below, this study suffers from major methodological shortcomings which make it nearly if not completely uninformative. Hence, the tone of the report, in presenting this as evidence of an effect of hydroxychloroquine and even recommending its use, is not only unfounded, but, given the desperate demand for a treatment for Covid-19, coupled with the potentially serious side-effects of hydroxychloroquine, fully irresponsible.