A review on Promising vaccine development progress for COVID-19 disease 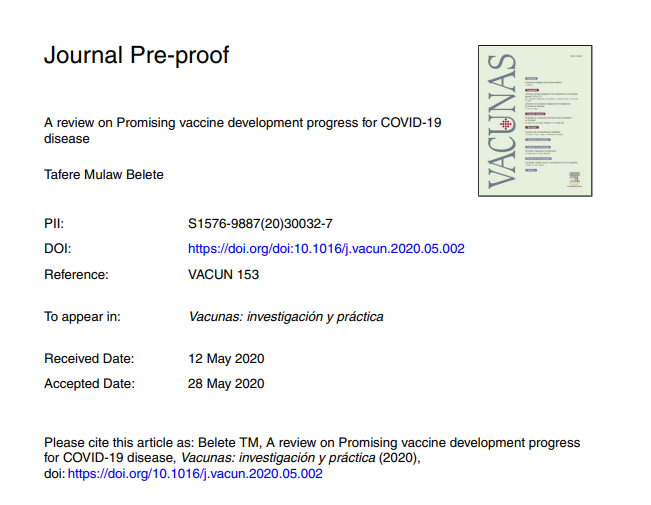 Viruses have a great potential to become a dangerous life-threatening and cause irreparable loss to human beings. Hardly the world learns to cope with one strain of virus when another emerges and poses a threat to the future of humanity. A similar situation has emerged when a new strain of severe acute respiratory syndrome coronavirus 2 (SARS-CoV-2) that has not been previously known in human history. Coronaviruses (CoVs) are nonsegmented, enveloped, single-strand, positive-sense, ribonucleic acid viruses belonging to the Coronaviridae family. CoVs named due to their Sun's corona or crown-like surface projections. CoVs are the largest group of host-specific RNA viruses infecting birds, snakes, bats, and mammals including humans. CoVs grouped into Alphacoronaviruses and Betacoronaviruses which mostly mammals like bats, civets, rodents, and humans and Gammacoronaviruses and Deltacoronaviruses which are mostly found in birds (1). In the 21st century, three CoVs outbreaks emerged from their reservoirs to cause disease in human. Several members of the Coronaviridae family infect humans. Humans are infected and developed upper respiratory tract diseases with different CoVs strains including 229E, OC43, NL63 and HKU1. OC43 and 229E causes common cold mainly during winter with 4%-15% prevalence. NL63 causes mild respiratory tract disease, especially in children with a prevalence of 10% of all respiratory diseases. HKU1was isolated from a 71-year-old man with pneumonia (2), (3). The three CoVs that cause serious respiratory diseases are severe acute respiratory disease (SARS-COV) which emerged in late 2002, Middle East respiratory syndrome (MERS-COV), which emerged in 2012, and SARS-CoV-2 that causes COVID-19 disease emerged in China as a threat to the human lives and declared as a global health emergency by the World Health Organization (WHO) (4). According to Johns Hopkins’ COVID-19 global case dashboard, almost all countries are now facing the Corona Virus Disease 2019 (COVID-19) wave with 5,518,905 cases and 346,700 total deaths reported on May 26th, 2020. So, there is an urgent need for an effective drug and vaccine for COVID-19 disease (5).