Novel SARS-CoV-2 outbreak and COVID19 disease; a systemic review on the global pandemic 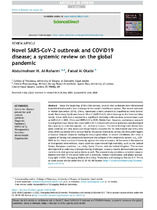 Since the beginning of the 21st century, several viral outbreaks have threatened humankind and posed a new challenge to the modern healthcare system. The recent outbreak in Wuhan (December 2019), China, represents a beta coronavirus classified as novel Severe Acute Respiratory Syndrome Corona Virus-2 (SARS-CoV-2) which belongs to the Coronaviridae family. Novel SARS-CoV-2 represents a significant similarity with previous coronaviruses such as SARS-CoV in 2002, China and MERS-CoV in 2015, Middle East. However, preliminary research investigations have shown the novel SARS-CoV-2 evolved with several mutations and developed the capacity to cross the species, i.e., animal to human. The initial findings have shown that spike proteins are vital molecules target hACE2 receptor for its attachment and entry into cells. After successful entry virus primarily focuses on respiratory airway cell lines and triggers a massive immune response leading to mucus generation. In severe conditions, the virus is capable of forcing viral pneumonia leading to the collapse of the respiratory system, i.e., COVID19. So far, there is a lack of immunity against the virus in humans. At the same in the absence of therapeutic interventions, many countries experienced high mortality, such as the United States, European countries, i.e., Italy, Spain, France, and the United Kingdom. The vaccine development is underway and experiencing challenges, as many reports demonstrated genetic variations in viral genome and proteins as well. The present study provides a complete comprehensive overview of the novel SARS-CoV-2 outbreak, human transmission, and global spread. Copyright ª 2020, Chongqing Medical University. Production and hosting by Elsevier B.V. This is an open access article under the CC BY-NC-ND license (http://creativecommons.org/licenses/ by-nc-nd/4.0/).