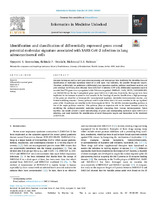 Genomic techniques such as next-generation sequencing and microarrays have facilitated the identification and classification of molecular signatures inherent in cells upon viral infection, for possible therapeutic targets. Therefore, in this study, we performed a differential gene expression analysis, pathway enrichment analysis, and gene ontology on RNAseq data obtained from SARS-CoV-2 infected A549 cells. Differential expression analysis revealed that 753 genes were up-regulated while 746 down-regulated. SNORA81, OAS2, SYCP2, LOC100506985, and SNORD35B are the top 5 upregulated genes upon SARS-Cov-2 infection. Expectedly, these genes have been implicated in the immune response to viral assaults. In the Ontology of protein classification, a high percentage of the genes are classified as Gene-specific transcriptional regulator, metabolite interconversion enzyme, and Protein modifying enzymes. Twenty pathways with P-value lower than 0.05 were enriched in the up-regulated genes while 18 pathways are enriched in the down-regulated DEGs. The toll-like receptor signalling pathway is one of the major pathways enriched. This pathway plays an important role in the innate immune system by identifying the pathogen-associated molecular signature emanating from various microorganisms. Taken together, our results present a novel understanding of genes and corresponding pathways upon SARS-Cov-2 infection, and could facilitate the identification of novel therapeutic targets and biomarkers in the treatment of COVID-19.