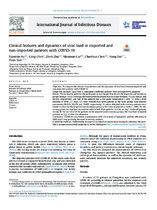 Objectives To compare the clinical characteristics and the dynamics of viral load between imported and non-imported patients with COVID-19. Design and methods Data from 51 laboratory-confirmed patients were retrospectively analyzed. Results The incubation period in the tertiary group was longer than that in the imported and secondary groups (both p < 0.05). Fever was the most common symptom at the onset of illness (73.33%, 58.82%, and 68.42%, respectively), and half of the patients had a low-grade temperature (<38.0 °C) with a short duration of fever (<7 days). CT scans showed that most patients in the three groups had bilateral pneumonia (80.00%, 76.47%, and 73.68%, respectively). Ct values detected in the tertiary patients were similar to those for the imported and secondary groups at the time of admission (both p > 0.05). For the tertiary group, the viral load was undetectable in half of the patients (52.63%) on day 7, and in all patients on day 14. For one third of the patients in the imported and secondary groups, the viral load remained positive on day 14 after the admission. Conclusions COVID-19 can present as pneumonia with a low onset of symptoms, and the infectivity of SARS-CoV2 may gradually decrease in tertiary patients.