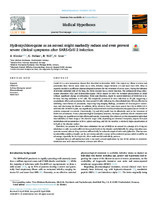 Covid-19 is a new coronavirus disease first described in December 2019. This respiratory illness is severe and potentially fatal. Severe cases make up to 15%, lethality ranges between 1.5 and more than 10%. What is urgently needed is an efficient pharmacological treatment for the treatment of severe cases. During the infection of alveolar epithelial cells of the lung, the ACE2 receptor has a central function. The antimalarial drugs chloroquine phosphate (CQ) and hydroxychloroquine (HCQ) impair in vitro the terminal glycosylation of ACE2 without significant change of cell-surface ACE2 and, therefore, might be potent inhibitors of SARS-CoV-2 infections. Starting inhibition at 0.1 µM, CQ completely prevented in vitro infections at 10 µM, suggesting a prophylactic effect and preventing the virus spread 5 h after infection. In a first clinical trial, CQ was effective in inhibiting exacerbation of pneumonia, improving lung imaging findings, promotion of virus-negative conversion, and shortening the disease. In addition, HCQ, which is three times more potent than CQ in SARS-CoV-2 infected cells (EC50 0.72 µM), was significantly associated with viral load reduction/disappearance in COVID-19 patients compared to controls. Theoretically, CQ and HCQ could thus be effectively used in the treatment of SARS-CoV pneumonia. From a pharmacological standpoint, however, the major problems of oral treatment with these drugs are possible severe side effects and toxicity. Concretely, this relates to (a) the inconsistent individual bioavailability of these drugs at the alveolar target cells, depending on intestinal resorption, hepatic first-pass metabolism and accumulation in liver, spleen and lung, and (b) the need for a relatively high concentration of 1–5 µM at the alveolar surface. Therefore, we propose in a first dose estimation the use of HCQ as an aerosol in a dosage of 2–4 mg per inhalation in order to reach sufficient therapeutic levels at the alveolar epithelial cells. By using a low-dose non-systemic aerosol, adverse drug reactions will markedly be reduced compared with oral application. This increase in tolerability enables a broader use for prevention and after contact with an infected person, which would be an advantage especially for the high-risk, often multi-morbid and elderly patients. Empirical data on self-medication with a one-week aerosol application by two of the authors is presented. Inhalation was well tolerated without relevant side effects.