Hypoxemia in COVID-19 patients: An hypothesis 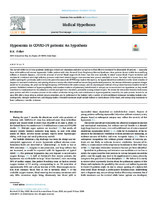 The current SARS-Cov-2 virus pandemic challenges critical care physicians and other caregivers to find effective treatment for desperately ill patients — especially those with sudden and extreme hypoxemia. Unlike patients with other forms of Acute Respiratory Distress Syndrome, these patients do not exhibit increased lung stiffness or dramatic dyspnea., even in the presence of arterial blood oxygen levels lower than that seen normally in mixed venous blood. Urgent intubation and mechanical ventilation with high inflation pressures and raised inhaled oxygen concentration have proved unhelpful or worse, but why? Our Hypothesis is that sudden opening of a previously undetected probe-patent foramen ovale (PPFO) may explain this mystery. As hypoxemia without acidosis is a rather weak stimulus of dyspnea or increased ventilation, and opening of such an intracardiac shunt would not worsen lung mechanical properties, the absence of dramatic symptom changes would not be surprising. We point out the high frequency of PFO both in life and at autopsy, and the physiological evidence of large shunt fractions found in Covid-19 patients. Published evidence of hypercoagulability and abundant evidence of pulmonary emboli found at autopsy are in accord with our hypothesis, as they would contribute to raised pressure in the pulmonary arteries and right heart chambers, potentially causing a shunt to open. We review the interaction between viral corona spike protein and ACE-2 receptors present on the surface of alveolar lining cells, and contribution to hypercoagulabilty caused by the spike protein. Search for an open PFO after a large drop in arterial oxygen saturation can be performed at the bedside with a variety of well-established techniques including bedside echocardiography, nitrogen washout test, and imaging studies. Potential treatments might include balloon or patch closure of the shunt, and various drug treatments to lower pulmonary vascular resistance.