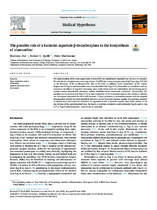 The understanding of the renin-angiotensin system (RAS) has significantly expanded over the last two decades. The elucidation of angiotensin-converting enzyme 2 (ACE2) that converts angiotensin (Ang) II into Ang (1–7) led to the discovery of the cardio-protective axis of the RAS. In addition, novel components of the system, Angiotensin A (Ang A) and alamandine have been identified. Like Ang (1–7), alamandine is a vasodilator and can counteract the effects of Ang II by increasing nitric oxide release from the endothelium and decreasing nicotinamide adenine dinucleotide phosphate oxidase (NADPH)-related superoxide production. Theoretically, alamandine can be derived from Ang (1–7) by decarboxylation of the N-terminal aspartic acid residue to alanine, but the enzyme responsible for this is still unknown. To date, no human or mammalian enzyme with the assigned decarboxylase activity has been identified. However, several bacterial enzymes capable of converting aspartate to alanine have been reported. Therefore, we hypothesize that a bacterial enzyme, most likely present in the microbiome of the gastrointestinal tract, the heart, or systemic circulation could metabolize Ang II, and/or Ang 1–7, to Ang A and alamandine, respectively, in mammals.