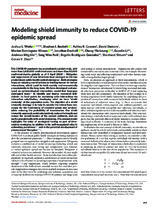 The COVID-19 pandemic has precipitated a global crisis, with more than 1,430,000 confirmed cases and more than 85,000 confirmed deaths globally as of 9 April 20201,2,3,4. Mitigation and suppression of new infections have emerged as the two predominant public health control strategies5. Both strategies focus on reducing new infections by limiting human-to-human interactions, which could be both socially and economically unsustainable in the long term. We have developed and analyzed an epidemiological intervention model that leverages serological tests6,7 to identify and deploy recovered individuals8 as focal points for sustaining safer interactions via interaction substitution, developing what we term ‘shield immunity’ at the population scale. The objective of a shield immunity strategy is to help to sustain the interactions necessary for the functioning of essential goods and services9 while reducing the probability of transmission. Our shield immunity approach could substantively reduce the length and reduce the overall burden of the current outbreak, and can work synergistically with social distancing. The present model highlights the value of serological testing as part of intervention strategies, in addition to its well-recognized roles in estimating prevalence10,11 and in the potential development of plasma-based therapies12,13,14,15.