A new coronavirus associated with human respiratory disease in China 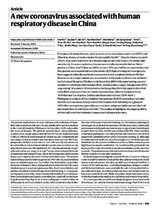 Emerging infectious diseases, such as severe acute respiratory syndrome (SARS) and Zika virus disease, present a major threat to public health1–3 . Despite intense research eforts, how, when and where new diseases appear are still a source of considerable uncertainty. A severe respiratory disease was recently reported in Wuhan, Hubei province, China. As of 25 January 2020, at least 1,975 cases had been reported since the frst patient was hospitalized on 12 December 2019. Epidemiological investigations have suggested that the outbreak was associated with a seafood market in Wuhan. Here we study a single patient who was a worker at the market and who was admitted to the Central Hospital of Wuhan on 26 December 2019 while experiencing a severe respiratory syndrome that included fever, dizziness and a cough. Metagenomic RNA sequencing4 of a sample of bronchoalveolar lavage fuid from the patient identifed a new RNA virus strain from the family Coronaviridae, which is designated here ‘WH-Human 1’ coronavirus (and has also been referred to as ‘2019-nCoV’). Phylogenetic analysis of the complete viral genome (29,903 nucleotides) revealed that the virus was most closely related (89.1% nucleotide similarity) to a group of SARS-like coronaviruses (genus Betacoronavirus, subgenus Sarbecovirus) that had previously been found in bats in China5 . This outbreak highlights the ongoing ability of viral spill-over from animals to cause severe disease in humans.