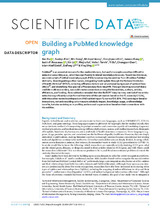 Experts in healthcare and medicine communicate in their own languages, such as SNOMED CT, ICD-10, PubChem, and gene ontology. Tese languages equate to gibberish for laypeople, but for medical minds, they are an intricate method of transporting important semantics and consensus capable of translating diagnoses, medical procedures, and medications among millions of physicians, nurses, and medical researchers, thousands of hospitals, hundreds of pharmacies, and a multitude of health insurance companies. Tese languages (e.g., genes, drugs, proteins, species, and mutations) are the backbone of quality healthcare. However, they are deeply embedded in publications, making literature searches increasingly onerous because conventional text mining tools and algorithms continue to be inefective. Given that medical domains are deeply divided, locating collaborators across domains is arduous. For instance, if a researcher wants to study ACE2 gene related to COVID-19, he or she would like to know the following: which researchers are currently actively studying ACE2 gene, what are the related genes, diseases, or drugs discussed in these articles related to ACE2 gene, and with whom could the researcher collaborate? Tis is a strenuous position to be in, and the aforementioned problems diminish the curiosity directed at the topic.