Targeting drug delivery in the vascular system: Focus on endothelium 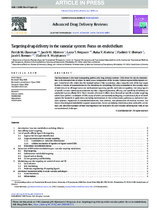 The bloodstream is the main transporting pathway for drug delivery systems (DDS) from the site of administration to the intended site of action. In many cases, components of the vascular system represent therapeutic targets. Endothelial cells, which line the luminal surface of the vasculature, play a tripartite role of the key target, barrier, or victim of nanomedicines in the bloodstream. Circulating DDS may accumulate in the vascular areas of interest and in off-target areas via mechanisms bypassing specific molecular recognition, but using ligands of specific vascular determinant molecules enables a degree of precision, efficacy, and specificity of delivery unattainable by non-affinity DDS. Three decades of research efforts have focused on specific vascular targeting, which have yielded a multitude of DDS, many of which are currently undergoing a translational phase of development for biomedical applications, including interventions in the cardiovascular, pulmonary, and central nervous systems, regulation of endothelial functions, host defense, and permeation of vascular barriers. We discuss the design of endothelial-targeted nanocarriers, factors underlying their interactions with cells and tissues, and describe examples of their investigational use in models of acute vascular inflammation with an eye on translational challenges.