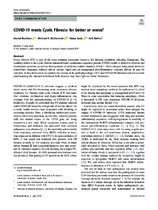 Cystic fibrosis (CF) is one of the most common autosomal recessive life-limiting conditions affecting Caucasians. The resulting defect in the cystic fibrosis transmembrane conductance regulator protein (CFTR) results in defective chloride and bicarbonate secretion, as well as dysregulation of epithelial sodium channels (ENaC). These changes bring about defective mucociliary clearance, reduced airway surface liquid and an exaggerated proinflammatory response driven, in part, by infection. In this short article we explore the overlap in the pathophysiology of CF and COVID-19 infection and discuss how understanding the interaction between both diseases may shed light on future treatments. COVID-19 (SARS-CoV-2) infection triggers a cytokine storm, sepsis and life-threatening acute respiratory distress syndrome [1]. Patients with cystic fibrosis (CF) also manifest cytokine dysfunction and hyper-inflammation that overlaps with the pathophysiology of COVID-19 [2,3,4]. Intuitively, it might be concluded that CF patients infected with COVID-19 would be at high risk of serious illness. As a result, health services have responded with shielding or cocooning policies. Thus, a Mendelian randomised experiment is effectively underway, in real time, whereby patients with two mutant copies of the CFTR gene are being exposed to a new virus. While respiratory viruses, such as rhinoviruses and influenza, are associated with increased pulmonary exacerbations [5, 6], the morbidity and mortality from respiratory syncytial virus (RSV) infection is lower than expected in children with CF [7]. In a past epidemic of RSV, it was noted that relatively few patients with CF became severely ill. For example, at a time when so many babies became ill that a regional intensive care unit exceeded its ventilator capacity for sick children, not a single CF-affected child became ill (AM personal observations over two decades). This paucity of CF patients in the RSV cohort might be explained by the recent proposal that RSV may need an intact autophagic pathway for replication [8], allied to the finding that autophagy is dysregulated in CF cells [9]. There is some speculation that inducing autophagy, which is increased in CF, may counteract COVID-19 infection, although data remain limited [10].