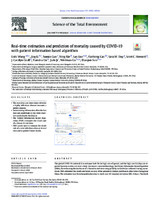 The global COVID-19 outbreak is worrisome both for its high rate of spread, and the high case fatality rate reported by early studies and now in Italy. We report a new methodology, the Patient Information Based Algorithm (PIBA), for estimating the death rate of a disease in real-time using publicly available data collected during an outbreak. PIBA estimated the death rate based on data of the patients in Wuhan and then in other cities throughout China. The estimated days from hospital admission to death was 13 (standard deviation (SD), 6 days). The death rates based on PIBA were used to predict the daily numbers of deaths since the week of February 25, 2020, in China overall, Hubei province, Wuhan city, and the rest of the country except Hubei province. The death rate of COVID-19 ranges from 0.75% to 3% and may decrease in the future. The results showed that the real death numbers had fallen into the predicted ranges. In addition, using the preliminary data from China, the PIBA method was successfully used to estimate the death rate and predict the death numbers of the Korean population. In conclusion, PIBA can be used to efficiently estimate the death rate of a new infectious disease in real-time and to predict future deaths. The spread of 2019-nCoV and its case fatality rate may vary in regions with different climates and temperatures from Hubei and Wuhan. PIBA model can be built based on known information of early patients in different countries.