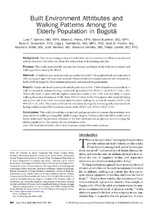 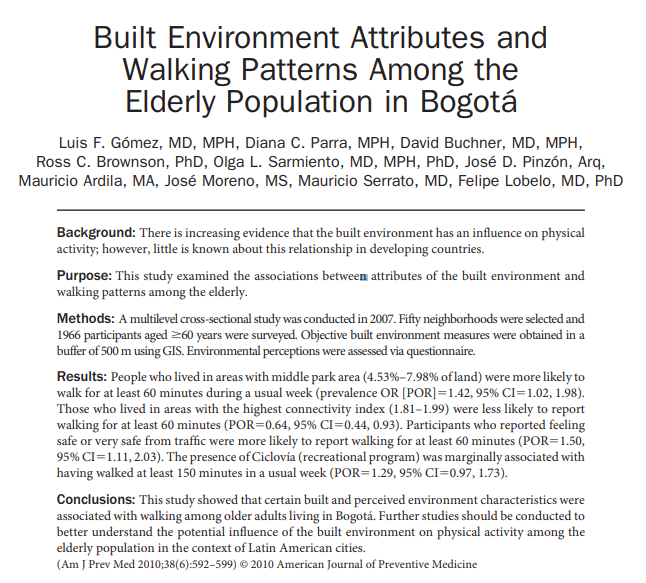 Background: There is increasing evidence that the built environment has an influence on physical activity; however, little is known about this relationship in developing countries. Purpose: This study examined the associations between attributes of the built environment and walking patterns among the elderly. Methods: A multilevel cross-sectional study was conducted in 2007. Fifty neighborhoods were selected and 1966 participants aged 60 years were surveyed. Objective built environment measures were obtained in a buffer of 500 m using GIS. Environmental perceptions were assessed via questionnaire. Results: People who lived in areas with middle park area (4.53%–7.98% of land) were more likely to walk for at least 60 minutes during a usual week (prevalence OR [POR] 1.42, 95% CI 1.02, 1.98). Those who lived in areas with the highest connectivity index (1.81–1.99) were less likely to report walking for at least 60 minutes (POR 0.64, 95% CI 0.44, 0.93). Participants who reported feeling safe or very safe from traffıc were more likely to report walking for at least 60 minutes (POR 1.50, 95% CI 1.11, 2.03). The presence of Ciclovía (recreational program) was marginally associated with having walked at least 150 minutes in a usual week (POR 1.29, 95% CI 0.97, 1.73). Conclusions: This study showed that certain built and perceived environment characteristics were associated with walking among older adults living in Bogotá. Further studies should be conducted to better understand the potential influence of the built environment on physical activity among the elderly population in the context of Latin American cities. (Am J Prev Med 2010;38(6):592–599) © 2010 American Journal of Preventive Medicine