Characteristics of the built environment associated with leisure-time physical activity among adults in bogotá, colombia: a multilevel study 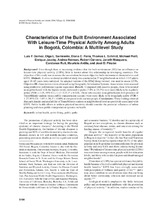 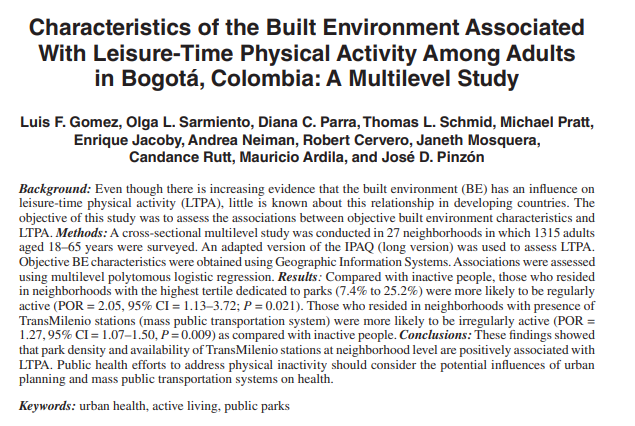 Background: Even though there is increasing evidence that the built environment (BE) has an influence on leisure-time physical activity (LTPA), little is known about this relationship in developing countries. The objective of this study was to assess the associations between objective built environment characteristics and LTPA. Methods: A cross-sectional multilevel study was conducted in 27 neighborhoods in which 1315 adults aged 18–65 years were surveyed. An adapted version of the IPAQ (long version) was used to assess LTPA. Objective BE characteristics were obtained using Geographic Information Systems. Associations were assessed using multilevel polytomous logistic regression. Results: Compared with inactive people, those who resided in neighborhoods with the highest tertile dedicated to parks (7.4% to 25.2%) were more likely to be regularly active (POR = 2.05, 95% CI = 1.13–3.72; P = 0.021). Those who resided in neighborhoods with presence of TransMilenio stations (mass public transportation system) were more likely to be irregularly active (POR = 1.27, 95% CI = 1.07–1.50, P = 0.009) as compared with inactive people. Conclusions: These findings showed that park density and availability of TransMilenio stations at neighborhood level are positively associated with LTPA. Public health efforts to address physical inactivity should consider the potential influences of urban planning and mass public transportation systems on health.