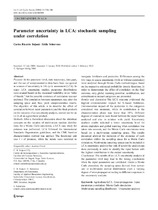 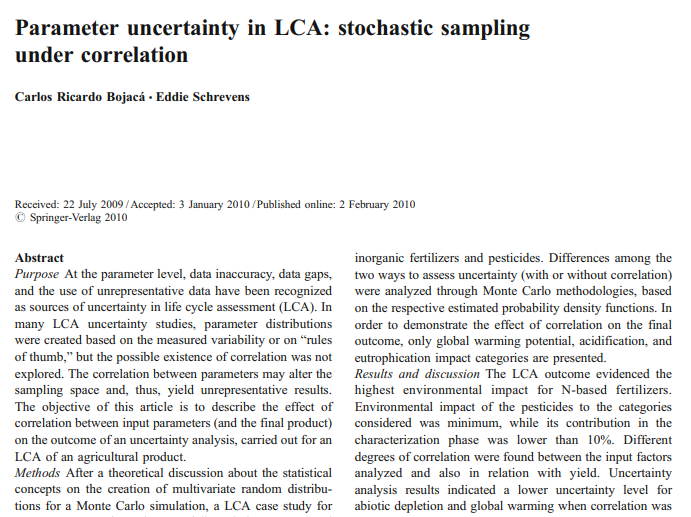 Purpose At the parameter level, data inaccuracy, data gaps, and the use of unrepresentative data have been recognized as sources of uncertainty in life cycle assessment (LCA). In many LCA uncertainty studies, parameter distributions were created based on the measured variability or on “rules of thumb,” but the possible existence of correlation was not explored. The correlation between parameters may alter the sampling space and, thus, yield unrepresentative results. The objective of this article is to describe the effect of correlation between input parameters (and the final product) on the outcome of an uncertainty analysis, carried out for an LCA of an agricultural product. Methods After a theoretical discussion about the statistical concepts on the creation of multivariate random distributions for a Monte Carlo simulation, a LCA case study for potatoes was performed. LCA followed the International Standards Organization guidelines, and the CML baseline characterization method was applied. The functional unit was 1 t of potatoes, while the inputs were restricted to inorganic fertilizers and pesticides. Differences among the two ways to assess uncertainty (with or without correlation) were analyzed through Monte Carlo methodologies, based on the respective estimated probability density functions. In order to demonstrate the effect of correlation on the final outcome, only global warming potential, acidification, and eutrophication impact categories are presented. Results and discussion The LCA outcome evidenced the highest environmental impact for N-based fertilizers. Environmental impact of the pesticides to the categories considered was minimum, while its contribution in the characterization phase was lower than 10%. Different degrees of correlation were found between the input factors analyzed and also in relation with yield. Uncertainty analysis results indicated a lower uncertainty level for abiotic depletion and global warming when correlation was taken into account, and the Monte Carlo simulations were based on a multivariate sampling space. The results presented allowed the inclusion of the existence of such correlation within the sampling space for a Monte Carlo simulation. Multivariate sampling spaces can be included in LCA uncertainty analysis but only if sensitivity analysis are done previously in order to identify the input factors with the highest contribution to the output uncertainty. Conclusions The results of an LCA uncertainty analysis at the parameter level may lead to the wrong conclusions when the input parameters are correlated. Under a Monte Carlo procedure, the sampling space derived from univariate or multivariate normal distributions exert a varying degree of error propagation leading to different responses in the uncertainty analysis.