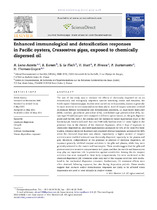 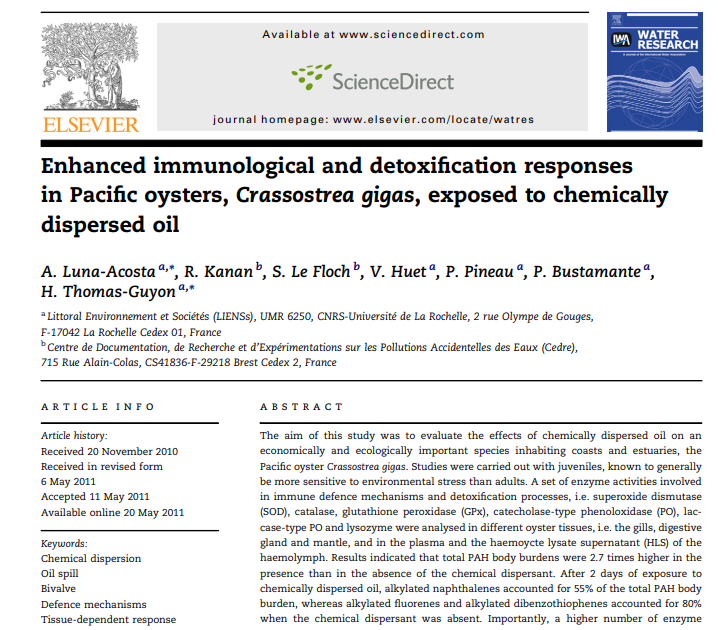 The aim of this study was to evaluate the effects of chemically dispersed oil on an economically and ecologically important species inhabiting coasts and estuaries, the Pacific oyster Crassostrea gigas. Studies were carried out with juveniles, known to generally be more sensitive to environmental stress than adults. A set of enzyme activities involved in immune defence mechanisms and detoxification processes, i.e. superoxide dismutase (SOD), catalase, glutathione peroxidase (GPx), catecholase-type phenoloxidase (PO), laccase-type PO and lysozyme were analysed in different oyster tissues, i.e. the gills, digestive gland and mantle, and in the plasma and the haemoycte lysate supernatant (HLS) of the haemolymph. Results indicated that total PAH body burdens were 2.7 times higher in the presence than in the absence of the chemical dispersant. After 2 days of exposure to chemically dispersed oil, alkylated naphthalenes accounted for 55% of the total PAH body burden, whereas alkylated fluorenes and alkylated dibenzothiophenes accounted for 80% when the chemical dispersant was absent. Importantly, a higher number of enzyme activities were modified when oil was chemically dispersed, especially in the plasma and gills. Moreover, independently of the presence or absence of chemical dispersant, oil exposure generally inhibited enzyme activities in the gills and plasma, while they were generally activated in the mantle and haemocytes. These results suggest that the gills and plasma constitute sensitive compartments in C. gigas, and that the mantle and haemocytes may play an important role in protection against xenobiotics. Among the six enzyme activities that were analysed in these body compartments, five were modulated in the chemical dispersion (CD) treatment while only half of the enzyme activities were modulated in the mechanical dispersion treatment. Furthermore, CD treatment effects were often observed following exposure, but also during depuration periods. These results suggest that immune and/or detoxification responses are likely to be affected when dispersants are used to treat oil spills in shallow waters.