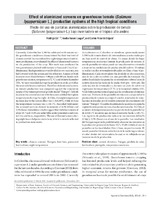 Currently, Colombia has 3,390 ha cultivated with tomato under greenhouse conditions characterized by their low level of climate control. In areas where low night temperatures limit tomato production, we evaluated the effect of aluminized screens on the production of the crop. This work was conducted in two greenhouses planted with tomato in Susa and Chía (Cundinamarca). Each greenhouse was divided in two sections, one half covered with the screen and the other not. Screens at both locations were closed between 5:00 pm and 6:00 am. Inside each greenhouse section, temperature (T, °C) and relative humidity (HR, %) were recorded during the production cycle, as well as the external climate conditions. The effect of aluminized screens on tomato production was compared against the simulation output of the tomato potential growth model “Tomgro”. In both locations the covered section with the screen yielded the highest temperatures during the night. At Chia, the night temperature increase due to the screen effect was 1.5±0.10°C, while in Susa the temperature increase was 1.1±0.1°C. Recorded yield under the screened sections showed increments of 6.6% (Chia) and 3.3% (Susa). Simulation results suggest that yield increments of about 15.7 and 13.6% are achievable under potential conditions in Chia and Susa, respectively. The use of thermal screens during night hours helps to retain heat, which in turn is reflected in production increments.