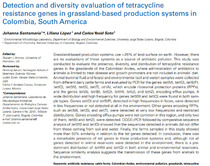 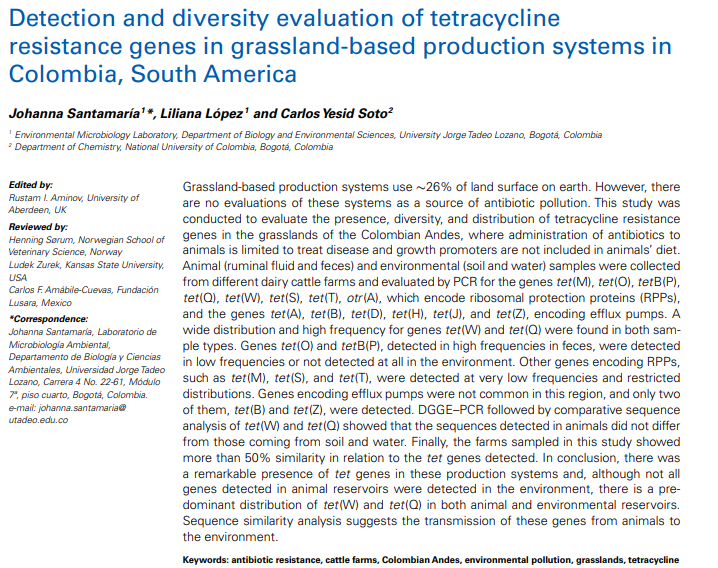 Grassland-based production systems use ∼26% of land surface on earth. However, there are no evaluations of these systems as a source of antibiotic pollution. This study was conducted to evaluate the presence, diversity, and distribution of tetracycline resistance genes in the grasslands of the Colombian Andes, where administration of antibiotics to animals is limited to treat disease and growth promoters are not included in animals’ diet. Animal (ruminal fluid and feces) and environmental (soil and water) samples were collected from different dairy cattle farms and evaluated by PCR for the genes tet(M), tet(O), tetB(P), tet(Q), tet(W), tet(S), tet(T), otr(A), which encode ribosomal protection proteins (RPPs), and the genes tet(A), tet(B), tet(D), tet(H), tet(J), and tet(Z), encoding efflux pumps. A wide distribution and high frequency for genes tet(W) and tet(Q) were found in both sample types. Genes tet(O) and tetB(P), detected in high frequencies in feces, were detected in low frequencies or not detected at all in the environment. Other genes encoding RPPs, such as tet(M), tet(S), and tet(T), were detected at very low frequencies and restricted distributions. Genes encoding efflux pumps were not common in this region, and only two of them, tet(B) and tet(Z), were detected. DGGE–PCR followed by comparative sequence analysis of tet(W) and tet(Q) showed that the sequences detected in animals did not differ from those coming from soil and water. Finally, the farms sampled in this study showed more than 50% similarity in relation to the tet genes detected. In conclusion, there was a remarkable presence of tet genes in these production systems and, although not all genes detected in animal reservoirs were detected in the environment, there is a predominant distribution of tet(W) and tet(Q) in both animal and environmental reservoirs. Sequence similarity analysis suggests the transmission of these genes from animals to the environment.