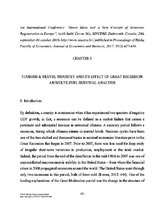 By definition, a country is in recession when it has experienced two quarters of negative GDP growth; in fact, a recession can be defined as a market failure that causes a persistent and substantial increase in unwanted idleness. A recovery period follows a recession, during which idleness returns to normal levels. Business cycles have been one of the less studied and discussed topics in seminal economics literature prior to the Great Recession that began in 2007. Prior to 2007, there was less need for deep study of irregular short-term variations in production, employment or the stock market. Indeed, the period from the end of the disinflation in the mid-1980s to 2007 was one of unprecedented macroeconomic stability in the United States – from where the financial crises in 2008 propagated recessions around the world. The United States went through only two recessions in this period, both of them mild (Romer, 2012: 644). One of the leading explanations of the Great Moderation period was the change in the structure of the economy, demonstrated by things such as the larger role of services and improvements in inventory management (McConnell and Perez-Quiros, 2000; Ramey and Vine, 2004). Another contributor was the improved policies that came with the triumph of the natural-state hypothesis and the emergence of a consensus that inflation should be kept low (Romer, 1999). And a third was simply good luck, in the form of smaller shocks hitting the economy (Stock and Watson, 2003).